On Sunday, August 15, 1926 The Jackson Citizen Patriot announces the Reynolds Building, Jackson’s tallest business structure is about to open. Its 14 stories overlook all other business blocks in Jackson’s mercantile district, the dominating structure being the realization of an idea conceived by Wiley R. Reynolds, president of the W.R. Reynolds and Company, one of the city’s leading real estate and insurance concerns.

It was August 1st, 1925 that the old building at 176 W. Michigan Avenue had been razed and the ground sufficiently cleared so that the foundation and excavation work could be started. The General Excavation and Foundation Company of Detroit was awarded the contract for the sinking of the caissons. There were 20 caissons, 4 feet in diameter sunk to a depth of approximately 40 feet through quick sand and treacherous soil. The caissons were then filled with concrete down to solid rock. 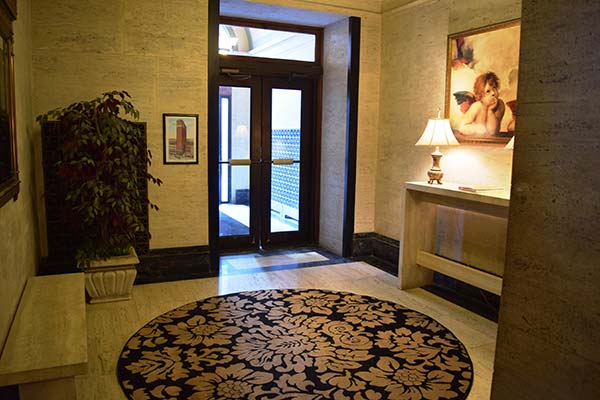 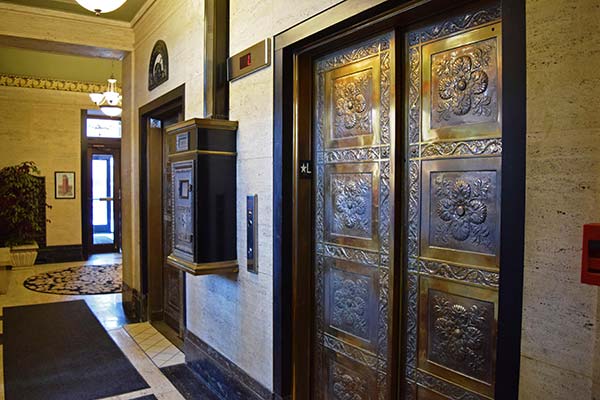 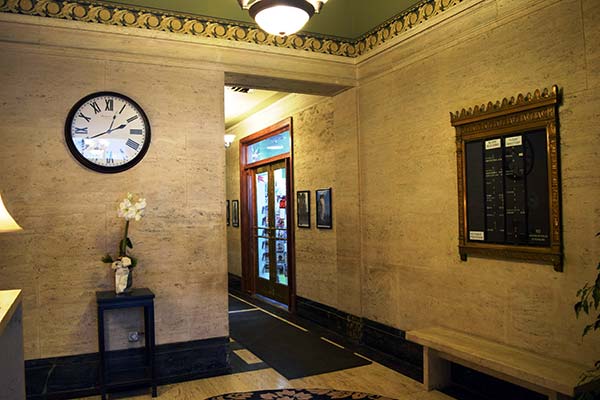 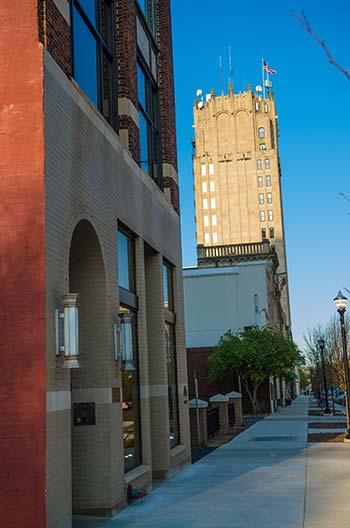 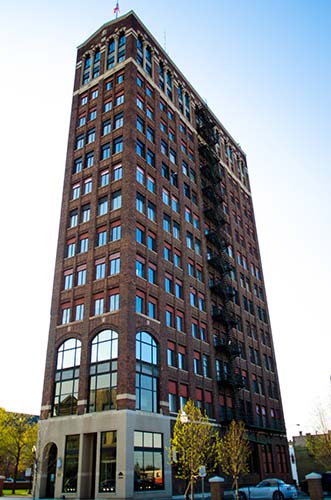 On February 15, 1926 the actual construction work above ground was started. The contract for this work was given to H. L. VanderHorst of Kalamazoo. Albert Kahn, Inc. of Detroit were the architects. Mr. Kahn has designed many famous Detroit buildings, including the GM Building, First National Bank Building, The David Whitney Building, and the Detroit Athletic Club to name a few.

This structure occupies a ground space of 30 feet by 112 feet. It rises into the air 14 stories, equivalent to 198 feet, 2 inches. The building is of steel and reinforced concrete construction, thoroughly fire proof, complete with all the latest features of building construction and service of the time.

The entrance into the building was through bronze doors into a simplistic lobby. Travertine marble quarried at Tivoli outside of Rome, Italy covers the side walls and floor. Originally, black and gold marble from Belgium covered the outside first and second stories. At this time, this was very rare, only a few buildings in New York had the black and gold marble. There were seven offices per floor, with each floor having 3075 square feet. 625 square feet are used for elevators, corridors, toilet rooms, stairways and smoke stacks, leaving 2350 square feet of rentable office space.

There was a fur storage vault in the basement of the building, with a cold storage plant blowing freezing air into the vault for the protection of furs against moths. The vault was constructed of durable side walls of 12 inches of reinforced concrete, the ceiling and walls are also reinforced with 12 inches of concrete. In addition to the concrete on the walls, 5 inches of cork has been placed for insulation. A three ton bank vault door with time lock combination is found at the entrance way. The vault was even protected by at phonetic alarm system connected to the American District Telegraph office in Jackson. The elevators have bronze doors, and offered the latest style of express type lifts manufactured by the Haughton Elevator Company of Toledo. The elevators have a speed of 550 feet per minute, and can reach the top floor in 20 seconds.

The building was sold to Ray Radner, a Detroit attorney and investor, in 1943. It was sold again to Charles Harris, president of Harris Investment Co. in the 60’s and renamed the Harris Building. A restaurant, Mr. Ham, Mr. Beef was added to the first floor. Mr. Harris was also the president of Harris-McBurney Co., a utility contracting firm. Their offices occupied the top 3 floors until 2002, when they moved their operations to Florida.

Randy Dowding purchased the building in the mid 90’s, where he housed his Coldwell Banker Real Estate offices. The building was again sold in February 2003 to Tim and Donna Blake. The building was renamed the Blake Building, and has undergone major renovations, including replacement of all mechanical equipment. The building currently enjoys 5 apartments, with plans for 4 more and many offices. The first floor is the home of “A Frame Above”, a custom framing and gift store. One of the original manual elevators was replaced with a “modern” elevator in 2013. The original bronze elevator doors still remain!